We are pleased to announce a new release of Automatiko - 0.16.0

Processing files as part of workflow is a common requirement. Automatiko introduced files storage support few releases ago and that was based on

With this release another file storage add on was introduced that is based on MongoDB. To be more precise it is based on GridFS of MongoDB. GridFS brings a lot of value when dealing with files as it takes care of replication and constant availability of data. Using MongoDB as storage for workflow instances and then using it as well for files makes it way easier to maintain at scale.

Have a look at more details about files storage in Automatiko documentation.

Workflow instances might be required to be kept after their completion. That might be due to legal reasons that enforce to have complete access to workflow instance data for a given amount of time. To make this happen Automatiko has a setting of so called instance end strategy that when set to keep will keep the completed (and aborted) workflow instances in data store. Though this entries are never removed and usually they comply with predefined retention policy.

0.16.0 comes with a feature that allows to set expiration at workflow definition level. This expiration is calculated based on the given ISO8601 date period e.g. P30D (which stands for 30 days) and the end date of the workflow instance. This information is stored in data store and by that can be targeted by retention policy logic that can simply clean it up based on the calculated value.

Have a look at more details about custom attributes on workflow definition in Automatiko documentation.

Note that the last two (end and expiration dates) will only be stored when instance-end-strategy is set to keep. As this will make the workflow instances to be kept in data store even after they are completed.

Important aspect here is a migration that depending on data store used might be required. See Automatiko documentation for details about migration required.

Before 0.16.0 release, persistence addon had to be specified in two places

The second requirement has been lifted off and now only dependency is required. Note that any other property for given persistence addon is still required to be defined. Only type of the persistence is no longer needed.

Use of expressions in event data mapping

In many cases direct workflow data object mapping to the event node is not enough. To give an example, imagine workflow definition should publish a message (or event) to the broker. The payload expected at the destination might come from multiple data objects (aka variables) managed by workflow so it is not really feasible to make it with single data mapping.

For exaclty this scenario, use of expressions is recommended. 0.16.0 comes with possibility to use expressions for event nodes (message event nodes benefit the most) to be able to perform more advanced data adjustements. 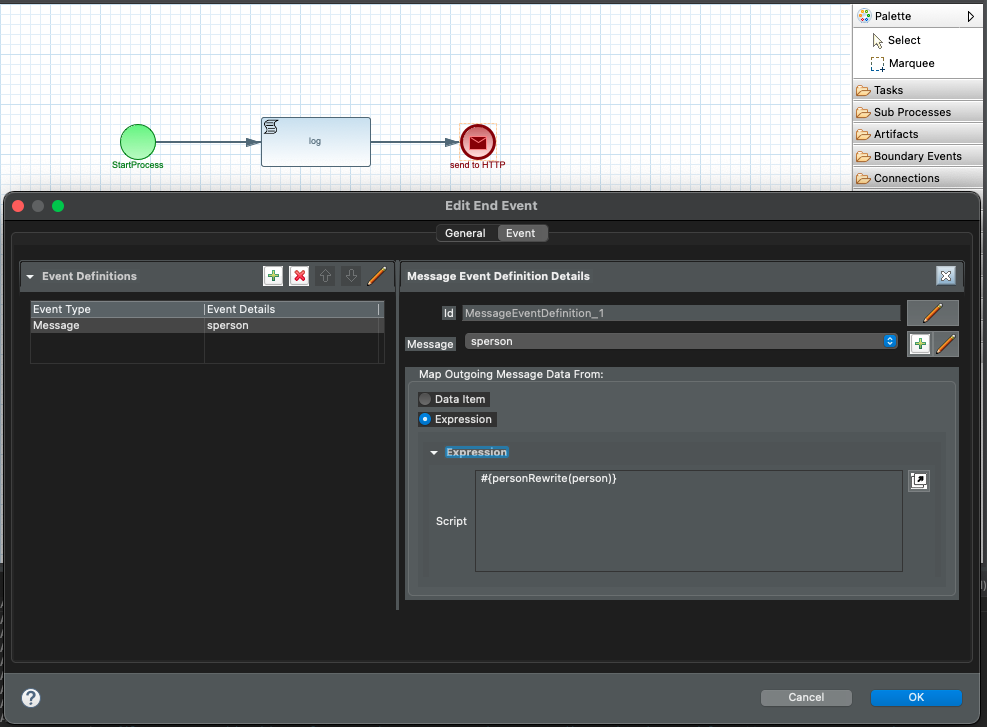 Use of expressions in message event data mapping.

Note that, these expressions can directly refer to Functions that make the code really clean on both ends. Functions are simple classes that implement io.automatiko.engine.api.Functions and expose public static methods like the example below

Automatiko function to be used as expression