This blog post is outdated, have a look at update to it that can be found here

Workflow as a Function Flow is a powerful concept that allows to build business logic as complete, end to end use case but takes advantage of serverless platforms based on Knative to provide highly scalable and resilient infrastructure.

Workflow as a Function Flow by default communicates directly with Knative Broker to publish events and by that trigger function invocation. This is not possible in managed service such as Google Cloud Run and thus to be able to run with same characteristics use of Google PubSub is introduced. This enforces some additional configuration steps as relying on Cloud Event type attribute as trigger is not enough.

In addition to the type attribute that is the main trigger, a source attribute of a Cloud event is also used. Luckily, Cloud Run with PubSub associates topic information (where the message come from) into the source attribute of the Cloud Event delivered by Cloud Run. This in turn is used by Automatiko to look up proper function to invoke based on the Cloud event attributes (type and source). Due to that, workflow and its nodes that compose the function must be additionally annotated to provide the topic information as a source attribute to filter on. All the details can be found in the Configuration section of this article.

A complete example can be found in this repository

Get started with Google Cloud Run

Have a look at the Google Cloud Run documentation to get started with the offering as such. Once you have environment ready to use you can try it out with Automatiko service running as Function Flow.

Configuration of the project is rather simple, once you create a project based on automatiko-function-flow-archetype there is one additional dependency needed

This dependency brings in Google PubSub event sink that will publish events for each function invocation during the instance execution. All data will flow through the PubSub topics, thus they must be created in advance.

Names of the topics are up to you to define though it common to use similar to package names format e.g. io.automatiko.examples.userRegistration

Link functions with topics - via workflow

Once the topics are defined, they need to be linked to functions. That is done via Custom Attributes of both process and nodes that will form the functions.

The entry point of the workflow is the first function we need to link to a topic. To do so, add following custom attribute on the process level (just click on the canvas and open properties panel) 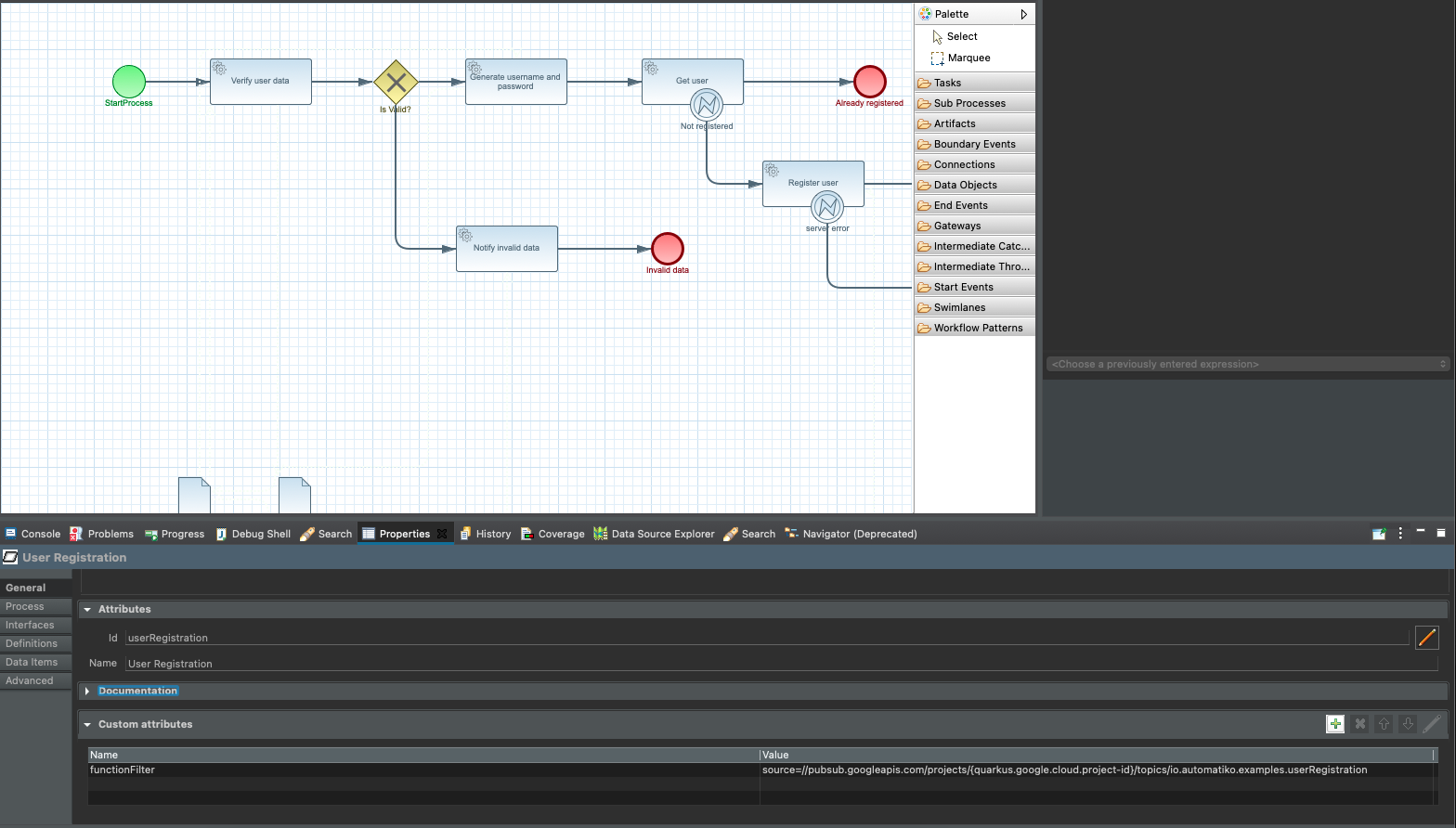 Perform same thing for all functions defined in your workflow (via tasks). 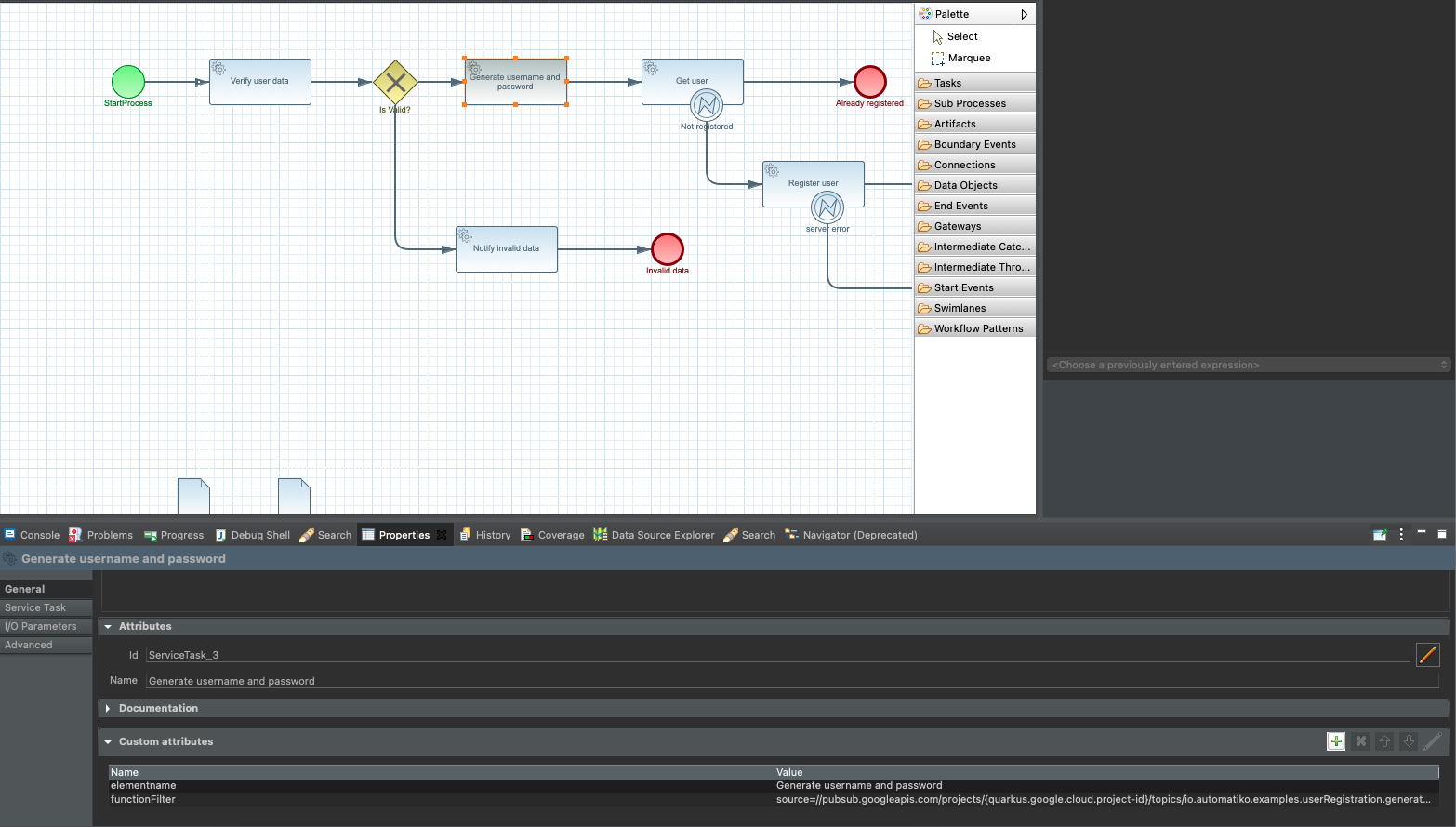 A small explanation is needed when it comes to this functionFilter attribute. What is defined here is that given function will react to events when they come from a given topic. Where

The reason why this is required is that Google Cloud Run (when using with PubSub) will deliver Cloud Events always with the same value set on type attribute and that is google.cloud.pubsub.topic.v1.messagePublished. That's why the extra filtering is required to be able to properly look up functions to invoke for incoming events. This is the main difference with vanialla Knative setup where access to the broker is allowed and thus the type attribute is the only thing needed.

Project configuration that resides inside src/main/resources/application.properties requires to have following defined

YOUR_PROJECT_ID must be replaced with actual project id that this service will be deployed to.

Once the configuration of the service is done and Google Cloud platform account (topics included) it's time to build it and deploy.

To build it it's as easy as just running single command.

NOTE: This command requires to have Docker installed as it will build docker container wiht native image in it.

Once the image is pushed you can deploy the service to Google Cloud Run. 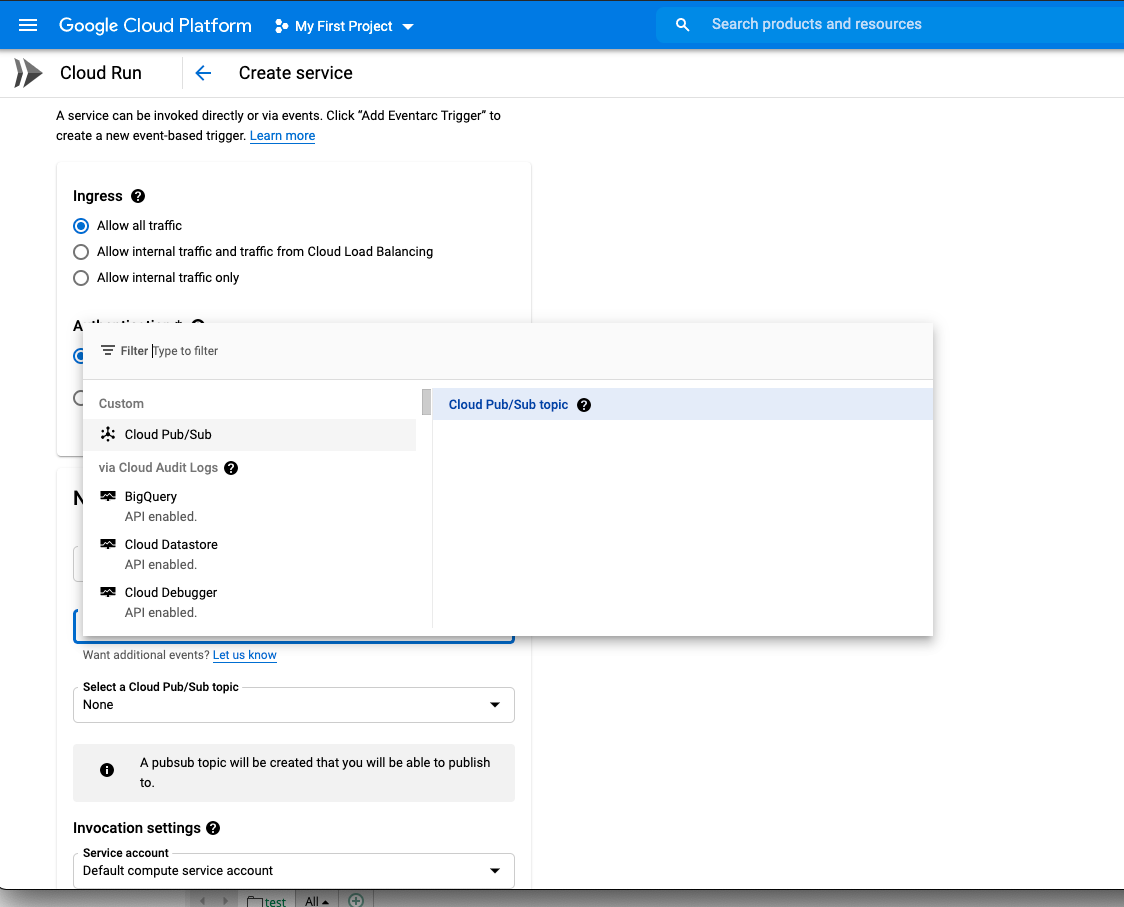 Create triggers for Cloud Run service. This should be done for all the topics that are linked to functions in your workflow.

Following video shows the steps to deploy to Google Cloud Run in details.

To start workflow execution (which will execute as function flow) publish new message to the topic that is linked with the workflow.

This article introduced you to use Automatiko and its Workflow as a Function Flow to execute on Google Cloud Run as a managed Knative environment. At the same time to reduce limitation of having direct access to Knative Broker, it uses Google PubSub as the way of exchanging events to provide efficient and highly scalable infrastructure.

This is just the beginning and number of improvements are in the works such as automatic generation of scripts to create topics and deploy the service with triggers. So stay tuned and let us know (via twitter or mailing list) what would you like to see more in this area.